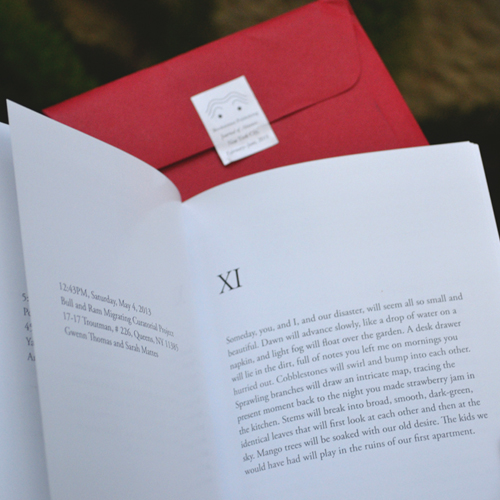 The Journal is the collaborative project of writer Oded Na’aman and artist Nino Biniashvili. During a six-month stay in NYC, Na’aman and Biniashvili set out to explore the city’s art scene. The book consists of nineteen micro-stories written on the basis of nineteen art visits, among which are: a visit to the Frick Collection exhibition of Piero della Francesca; studio visits in Bushwick and at the Brooklyn Army Terminal; a visit to Rebecca Chamberlain’s show at Dodge Gallery; a visit to Acconci Studio; and a visit to Printed Matter, Inc. (In total: 12 art shows, 4 artists’ studios, 1 art bookstore, 1 art dealer, and 1 print shop. The nineteen micro-stories form nineteen entries in a journal of absence, where text takes the place of art.

Oded Na’aman is an Israeli author and essayist currently splitting his time between New York and Boston. Oded’s articles and essays have appeared in Boston Review, The Nation, Huffington Post, The Guardian, Foreign Affairs, as well as other publications, and have been translated into Italian and German. Oded’s short fiction has appeared in numerous Hebrew publications, including Ha’aretz, Keshet HaHadasha, Masmerim, and Maayan. Oded is also co-editor of Our Harsh Logic: Israeli Soldiers’ Testimonies from the Occupied Territories, 2000-2010. Oded is a PhD candidate in Philosophy at Harvard University.